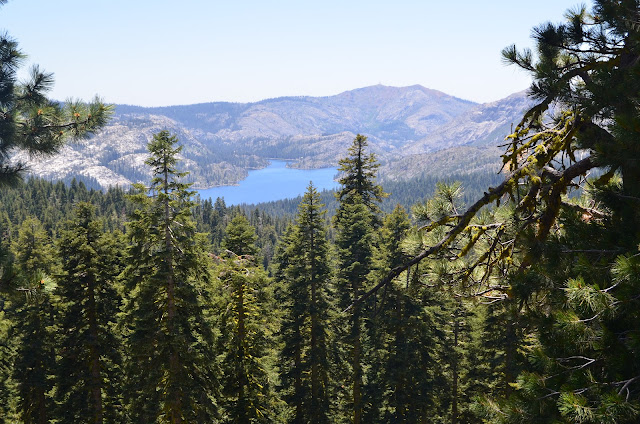 Meadow Lake is located in a remote area within the Jackson Meadow Reservoir, about 8900’ in elevation, and only accessible by dirt roads.  Sounds like our kind of place, so off we go to visit some co-workers/friends and explore a new area with hopes to see the bald eagles living there.
These are our kind of roads, because few are willing to travel them.  4Wheel Drive is not required, however high clearance advisable – well unless you diverted off to other roads – then there are plenty of opportunity for 4Wheel drive. 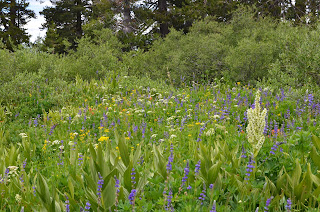 The ride had some stunning views with all the wild flowers in bloom, cliffs, and mountains, however a little nerving with all the ruts, washboards, and rocks in the dirt road.  After 10 miles of dirt road; we made it – and all in one piece! =))) 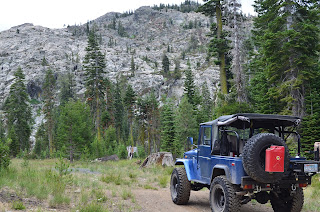 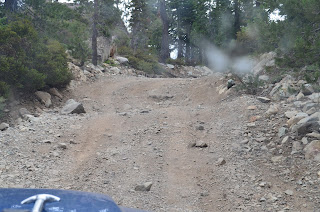 We never like going back the same way, so we decided to take a shorter route (8 miles) to go see the boss.  About a mile or so into the departure, we quickly notice we were going to have an interesting ride.  Here we were facing a whole other set of obstacles; for starters it was all downhill, deeper ruts, more rocks, and water crossings.  Hang on this could be interesting, says Jerry!!!
All Deb could say is HOLY S#@& what have we gotten ourselves into to!!  Quickly, Deb decided she would walk to help Jerry have more control with less weight – as he already had the weight of the three saddle bags – plus she was a nervous wreck!!  Jerry had his work cut out trying to maneuver the bike down the hill dodging deep ruts and rocks; couple of times the road won.  Deb would come around the corner to find Jerry on the ground (twice) with the bike – you talk about being a nerves wreck!!  Every time he applied the brakes the front wheel would slid, which made the bike uncontrollable.  That is until Jerry realize he could turn the ABS brakes off, then he could have more control of the bike.  After about five miles of walking/running, we got to smoother ground for Deb to get back on and get the hell out of there. 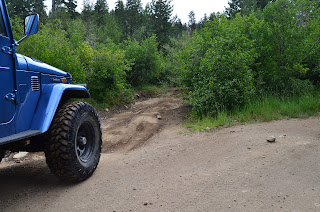 Thank the Lord for protecting us, as this could have turned out to be a very ugly situation!!
However, it didn’t stop us from going again in the FJ40; this time backwards so we could really see what we faced on the motorcycle.  Plus, we were able to get these pictures for you.