Welcome to the "Bone Yard"


Ever been to a place where there were thousands of bones just laying beneath the surface?
Any palentologist would love to hit that kind of jack pot!!
Welcome to Dinosaur N. M. in Utah/Colorado
Yep, it's true, the dinosaur quarry still has about 1500 bones in the same format in which they were found, and the only park area set up to protect a historic dinosaur quarry.
It all began with Earl Douglass discovered the dinosaur quarry in 1909 while he was working as a paleontologist for the Carnegie Museum, Pittsburgh, PA.  In 1915 the Carnegie Quarry’s world-class bones of late- Jurassic dinosaurs were protected.  Today the park has some 210,000 acres to explore the quarry and the scenic and historic Green and Yampa rivers, as well as American Indian petroglyphs dating back some 1,000 years old. 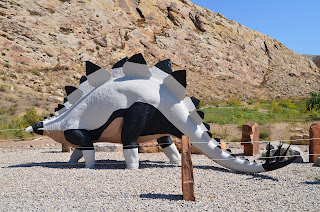 Whether your passion is science, adventure, history or scenery, Dinosaur offers much to explore.
Posted by Jerry and Deb at 1:21 PM