When you hear "Death Valley", what’s the first thing you think of?
For Deb; she could only image sitting in a hot desert just waiting to see "rocks" move.   Oh how that all changed when we arrived....
There is so much to see, but before showing you the scenery, let us give you a little history about Death Valley.

Death Valley and the desert ranges surrounding it were set aside as Death Valley National Monument by President Herbert Hoover on February 11, 1933.  Some 60 years later, on October 31, 1994, after a quarter of a century of visionary grassroots efforts to save the California desert, the monument was given national park status and enlarged to 5,264 square miles, an increase of about 63% over its former size.  Nearly 93% of its huge land area is officially designated as wilderness.
Death Valley is hydrologically divided in two parts.  The northern part is mostly a dry, sandy, and bushed-covered.  Northward, it gradually tapers down and gains elevation, form just below sea level to about 4,000 feet.
The southern valley is very different.  A sizable portion of it, about 500 square miles, lies below sea level.  Its lowest point is at -282 feet, which is the lowest land elevation in the western hemisphere.  The "heart" of the park.
The weather can range from a mere 39 degrees in the winter months, to a blistering 115 degrees in the summer.  The official weather station at Furnace Creek Ranch reported 15 degrees as a low back on January 1913 with the record high being 134 degrees on July 1913.  We fell right into the average temps for April – 62/90, however there were some strong winds for a couple of days, as a storm pushes thru ~ snow in the mountains with possible rain below.
Death Valley has something for everyone – mountains, canyons, dunes, open valley, water, crater, castle, ranch, ghost towns and even a golf course or two.
With its fields of jagged pinnacles stretching out as far as the eye can see, Barren salt flat known as “The Devil’s Golf Course” is one of the most unusual landscapes around.  Up to 2 feet high, the pinnacles are made of silty halite.  What got them started is not fully understood, but what keeps them going is ground water that comes up through them by capillary action and leaves behind a little salt upon evaporation.  Rain and wind prevent the pinnacles from growing too tall, trimming their tips to razor-sharp points. 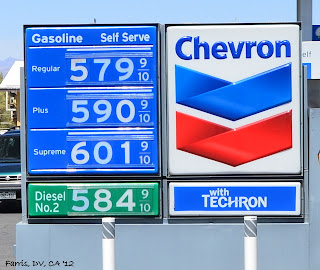 "You only going to live once, so go have yourself some fun".

Retreat to Nature; all those indescribable effects wrought by color, shadow, sunlight, green hedges, and songs of birds – just open the mind and let the spirit come in.
For us; it’s time to give our feet a break, let the gas budget level out, and head to our next great adventure! (A little more on that later) =)
Oh wait...guess we have a little  maintenance issue to take care of first...

Glad Jerry found this before loading the "toy" onto the trailer.  Last thing we need is to have a blow out, so Deb got to drive the "toy" to Tonopah,NV - 130 miles, while Jerry drives the rig.

FUN TIMES....
although we didn't get to see rocks move, we enjoyed our visit, look forward returning one day!!
Posted by Jerry and Deb at 2:45 PM