It seems an unlikely destination for an old world relic, but the official London Bridge, built in 1831 is indeed, the very same bridge that now resides in Lake Havasu, Arizona. 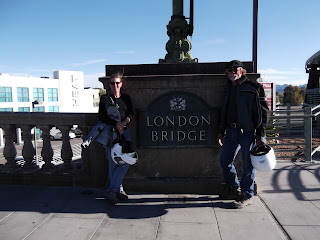 What a beautiful day for a ride, thru the Desert Mountains, with our friend Ed.  No one had seen the London Bridge before, except in magazines or the web, so it was treat. The ride was about a 160 mile round trip from Quartzite, AZ.


The London government was in financial straits, it needed someone willing to buy the crumbling heirloom and remove it for them. Luckily, the right person came along, oil man Robert McCulloch, purchased the London Bridge for $2,460,000 and paid an additional $7,000,000 to have the bridge dismantled, shipped to American and reconstructed in its current location.

The dismantling process was long and tedious; each stone had to be numbered in order to be properly replaced in Arizona. Also, McCulloch strategically had the bridge declared and antique in order to save on taxes for such a monumental purchase. The bridge’s parts were initially shipped to Long Beach, California and then sent on to Lake Havasu. The bridge was finally opened on October 10, 1971 to great enthusiasm.