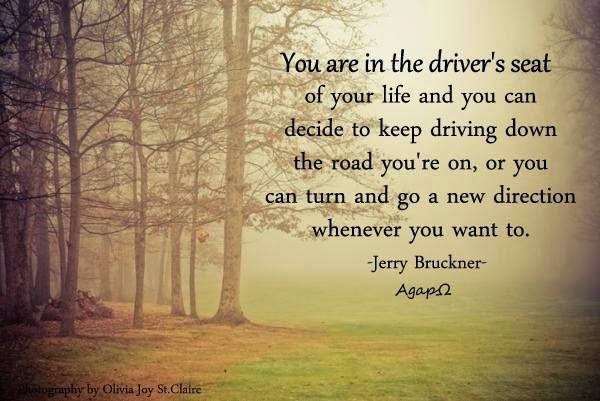 I love getting in the car and going for a ride; a memory I cherish from my childhood.  We would stop by the store, grab a soda and a snack (usually peanuts and put it in my soda), and would often hear "not sure where this road goes, but guess we will find out".

Well on this day in 2006 my dad got into the driver seat and headed down a familiar road, but yet unfamiliar all at the same time.  Something seemed so different this time; he asked God to guide him and lead him to surrender his need for another drink. Along the way he found much more then he could ever dream to be possible - a happier man, husband, and dad.  A gift I will cherish for a lifetime!!!
Then this past February (February 22, 2014) he turned down another road with a leap of faith - an all new road, yet to be paved.  Turned out to be much rougher and challenging, but can see the end in sight.  I've seen the struggles, his determination, and know he will complete this challenge and  journey as well --- and be smoke-free until the end.

Dad, I could not be more proud of you for all you've been able to accomplish after so many years of struggling!

In celebration stop by the store, grab that soda and peanuts on your way to Lewisville to get a new star added to your Zippo.  For the ones who's not in the know; my mom and I wanted something special he could carry with him as a reminder of his accomplishments.  After given serious thought we chose a Zippo lighter (something he had been wanting), had a message engraved on it, and each year of accomplishment a star gets engraved on it.  Wish I had a picture of the lighter, but this is the message...

"Surrender is not being weak and giving up, it's simply coming over to the winning side using a power greater than yourself to continue the journey"

I've had my share of drunk fest and took up smoking (not once, but twice).  I seldom have an adult beverage these days and have been smoke-free since April 1997.  I'm very thankful everyday for choosing a different road.  This saying has always driven me... you either go with it or you go totally against it - I prefer "against it".  But, it's so easy to get pulled into either of these diseases, especially if your have the gene or addictive personality; something to keep in mind - doesn't matter of rich or poor.
With love, be safe ~D.
Posted by Jerry and Deb at 10:04 AM